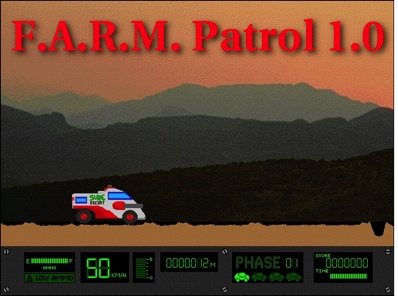 "... pays homage to the arcade classic, Moon Patrol ...
a great stress reliever for anyone with a monster commute."
-- Download.com

You are the driver of an armored vehicle patrolling the site of a post-apocalyptic west coast university (hint: Not Cal). Armed with a cannon and rocket launcher, you must defend yourself against mutant hordes and navigate a treacherous wasteland. Prepare yourself for eight grueling levels of giant, rabid, acorn-launching squirrels; angry, balloon-riding, axe-wielding Cal mascots; and gaping ravines left by vicious earthquakes. Bring clean underwear.

ftp://wuarchive.wustl.edu/systems/mac/info-mac/game/arc/farm-patrol-10.hqx
A StuffIt archive of the game and associated documentation.

Also available from these mirror sites (list compiled by shareware.com)

If you've played F.A.R.M. Patrol, we'd love to hear from you! Send E-mail to sparckl@cs.stanford.edu or barron@cs.stanford.edu. Please note, however, that all of the original programmers have moved on to less cartoonish pastures and may not have time for further development.

Special thanks to They Might Be Giants for providing sound effects (sampled from their album John Henry).

Posthumous thanks to CNET for their glowing review in "Zapping the Road Trip Doldrums".

F.A.R.M. Patrol was originally developed as a Senior Project for the Stanford Computer Science Department. The project group consisted of five undergraduate CS majors with a really sick collective sense of humor.